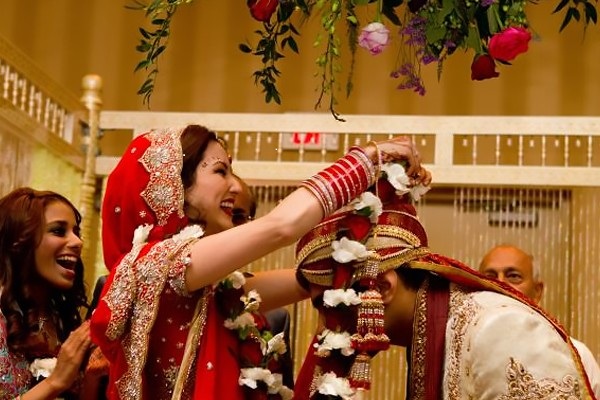 What Is Marriage | What is Shadi

Often people have a question whether it is necessary to marry or why marriage is necessary and those who accept that we have to get married then their question is what is the right way of marriage, what are the rituals and ceremonies of marriage. According to Hindu religion, an act has been passed for marriage named as Hindu Marriage Act.

Under Marriage Act, the entire information about what is the marriage has been mentioned. Today, through the shadi ki website, we will tell what marriage is, the process of getting married and we will also discuss about the rituals and ceremonies..

Marriage is also called Vivah. According to Wikipedia, its definition says that marriage is a social or religious affiliation between two people, which establishes rights and obligations between those people.

As you all must have seen, the way we marry in our Hindu religion, Muslim religion, Sikh religion is different and all of them have different customs as well.

Wedding, which is also called a wedding festival, in which many People celebrate the customs.

The Hindu Marriage Act was passed in 1955 by the Parliament of India. Marriage in Hinduism is considered as a sacrament of 16 rituals. Marriage in other religions is a type of agreement between husband and wife, which can go wrong in special circumstances but wedding is a life time connection as per Hinduism.

Nominal changes have been made from time to time in the Hindu Marriage System by the Act. Every Hindu woman can marry another Hindu man, whether it is of any caste. This duty has been imposed on the courts that their first attempt should be to resolve the disputes in each marriage. Courts have also been given the right to manage and provide nutrition for minor children.

Well, there are many relationships in this world like parents, uncle, aunt, brother and sister etc. All these relationships are special in their place but the most special relationship of the world is of husband wife. But in today’s time everyone’s idea has changed towards marriage. In today’s time both boys and girls have different opinion about marriage. Some people consider marriage as an offense, and then some people need life partner. Due to different assumptions today the meaning of marriage has completed changed.

It is believed that husband and wife are complementary to each other. Marriage does not only give you a trusted partner but also a good friend in form of a husband or wife. Marriage is necessary and it is also said that one does not get respect in the society if he/she does not marry. So let’s know what are those things that you can keep in mind that why it is important to marry.

If you do not get married then you always lack the shortage of a good friend. Apart from this marriage also increases the age of human being. Sometimes there is no respect for you in the society if you do not get married. There are many turns in life; where you feel the need for a good life partner. Even though youth may take it lightly and as a fun in their young age but as the days passes by, you start feeling lonely. You also need care when you get older, only a trustworthy, caring and loving a partner can do it.

Keeping these things in mind, you should take your own decision. Even after this, if you do not want to get married then it is your personal decision. The meaning or purpose of marriage is not any kind of tension. This is an invaluable relationship made by God that caters to the purpose of your life.

There are some traditions and customs that have been running from the old times and are being played by the people in our midst, whether it’s the mother pulling groom’s nose in his welcome or throwing rice on the groom’s face.

It happens with many couples, they want to marry, but they do not know anything about the procedure and they are scared even while investigating. Let’s see if you want to get married, then what is the procedure.

Marriages in Arya Samaj Temple are under the Hindu Marriage Act. Arya Samaj temples register the marriage and marriage certificates are issued. Not only this, they make sure that you both agree for marriage, whether or not both the parties are eligible for marriage etc.

Under Muslim Law, nikaah is a civil contract and an offer is given for marriage, which the girl admits. The amount of Mehar fixed under this contract is given to the girl. This is done in the presence of kazi and witness. Under Muslim law, the young woman’s age is 15 years or more.

Under the Hindu Marriage Act, marriage should be practiced by Hindu custom. To get married as per Hinduism both the parties take a vow along with many other rituals followed, only after that marriage is considered complete.

If you have decided to get married and have time, you can also arrange a court marriage. Marriage under Special Marriage Act is called Court Marriage.

In the court, the youths can also marry in spite of difference of religion and caste.

Marriage in Arya Samaj Temple is under the Hindu Marriage Act. The Arya Samaj registers the marriage and also issues certificates. Before marriage, it is also confirmed that both parties are eligible for marriage and agree with marriage.

A marriage done in Arya Samaj temple is legally valid, all factors are checked prior to the marriage like the age proofs are seen that both parties are also eligible. Arya Samaj also registers all these facts in the temple register and also issues marriage certificate.

In order to get married in Arya Samaj temple, the age of the male and female should be 21 years and 18 years respectively.

Both parties should have proof of date of birth such as their birth certificate or matriculate certificate etc.

There should be two wittiness.

Address proof is must.

An application form is filed 2 days before marriage, with which the date of birth certificate is attached. Only after completing the entire formalities one can get married.

If you have decided to get married and you have some time then you can opt for a court marraige. Usually, the marriage under the Special Marriage Act goes to the court marriage itself.

For this, the information regarding the marriage of the boy and girl in the prescribed form is to be presented to the District Marriage Officer. A nominal fee is charged. Photo Identity Cards are also submitted along with this application form. Required entries are done in the application notice book of collector’s office.

If there is no legal obstacle, marriage can be done within the 30 days of issuance of notice or in the presence of district marriage officer before the end of the 3 months of application.

In court, marriage can be done in spite of difference of caste or religion.

How to register a marriage.  Online Marriage Registration India

First of all, for the application, you have to download the form by visiting the departmental website.

Select your City and fill in the details.

After that all the necessary documents are scanned and attached to the form.

What happens immediate after marriage

What Happens on the First Night After Wedding?

Before marriage, almost every couple imagine about their upcoming wedding night. One may feel excited, nervousness, feel butterflies in stomach or so many emotions at a time.

All who haven’t been there must be interested to check out what really happens on first night? Here is list of such things couples usually do on their first wedding night:

Sleeping for a long time

Indian weddings are full of rituals. The couple and relatives had to awake for 2 to 3 nights continuously. So many ceremonies and rituals are to be followed; the couple doesn’t get time to take a small nap or rest. So, by the time they enter in to their decorated room, they feel so tired and exhausted that they want to sleep for as long as possible.

Getting rid of heavy clothes and expensive ornaments

It’s not easy to wear and maintain so heavy clothes and jewelry for a long time. Only the couple knows how badly they want to get rid of these things. So as soon as they enter in their room, the groom helps his bride to get free from all sort of endless jewellery.

This is another type of fun couples have on their first wedding night. It seems very exciting, but all sort excitement disappears as soon as they find home appliances, lamps and crockery in these gifts.

Before few days of wedding, couples do not get time to talk, especially in love marriages. And finally, when they get time on the first wedding night to talk then they just talk, talk and talk. They can talk for the whole night. 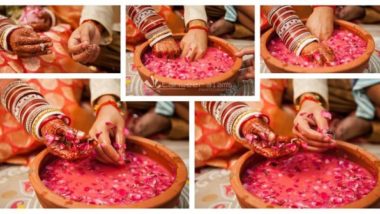 Indian Wedding Games For The Bride And Groom 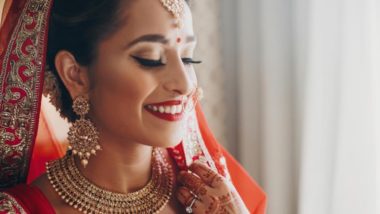