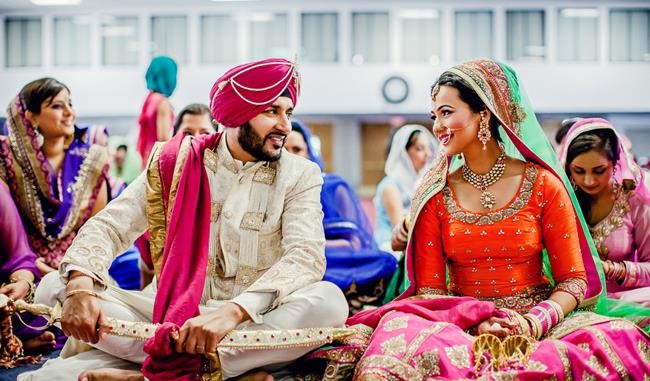 Punjabis are fun-loving people, they not only love to party hard but they are a good host as well. As their nature is fun-loving as their weddings are. Punjabi weddings are full of music, dance, and unlimited fun. No matter whether the wedding is simple or lavish, it’s full of fun. Punjabi weddings are colorful and loud. A Punjabi wedding is almost like a roller ride, full of so many emotions.Happiness, enjoyment, love, shyness, blushing and weeping. It starts from happiness but as along with the rituals fell down the immediate family members feel emotionally weak because the loving daughter of their home is going to get married soon. Let’s take a ride of this roller coaster by going through various wedding Rituals of a Punjabi Wedding.

Punjabi Wedding Rituals start from Roka ceremony. The bride’s family bless the groom with their blessing along with presents for the groom and his family like fruits and sweets. This ceremony is celebrated at the groom’s place only. This Custom is called as the Roka. The bride is usually not present at the Roka.

Generally, this ceremony takes place on the same day as the chunni chadhai ceremony.  This ceremony announces the engagement of the couple officially.  Sagaai Ceremony is a grand ceremony. In Engagement ceremony, the couple exchanges ring amidst their family and near & dears. Both the families exchange gifts and presents also.

Mehandi Ceremony is organized not only at bride’s place but also at the groom’s place as well. Heena paste is applied on the bride’s hands and feet.  formerly, family members apply the henna paste on their own but now professional mehendi artists play this role. Usually, mehendi ceremony is celebrated a day or two prior to the day of the wedding. At the groom’s place, family members and close relatives (females) apply Mehendi on their hands and feet. This ceremony is full of lots of dance and masti & dhamal.

Often on the same evening or night, a ladies’ Sangeet is arranged where all the ladies close to the bride and family sing and dance. The ladies sing Punjabi folk wedding songs while playing musical instruments like the dhol, dance and tease the bride also.

Sangeet ceremony is no doubt one of the most entertaining and fun-filled ceremonies of a Punjabi wedding!

On the night just before the wedding, the entire family stays wake up till late night and celebrates Jago at early hours of the morning.  Jago means “Staying Awake”. This ceremony is celebrated at the groom’s and bride’s places. The idea is to celebrate and make fun by dancing and singing.

On the morning of the auspicious wedding day, puja is done at the bride’s and groom’s homes. Bride and groom attend the puja and a sacred thread or mouli is tied to their right wrists. The mouli is ornamented with kaudis (shells) and supari (betel nut). Mouli has to knot as many as times possible so as to make it more tricky to untie it later.

Chooda basically refers to a set of red/maroon and white bangles. The maternal uncle of the bride plays a vital role in Chooda ceremony. A havan is organized during which the chooda is put and purified in liquid mixture containing ganga jal, milk and rose petals. Maternal uncle and aunt slip the Chooda into the bride’s wrists. Wedding Lehenga is gifted by her maternal uncle during Chooda Ceremony.

In this ceremony, sisters of bride knot kalire to the chooda. Kalire are umbrella shaped, usually red or golden in color. Bride shakes her knotted kalire and unmarried girls stand under it. It is traditional belief that the girl on whose head a part of the kalire falls is going to marry next. 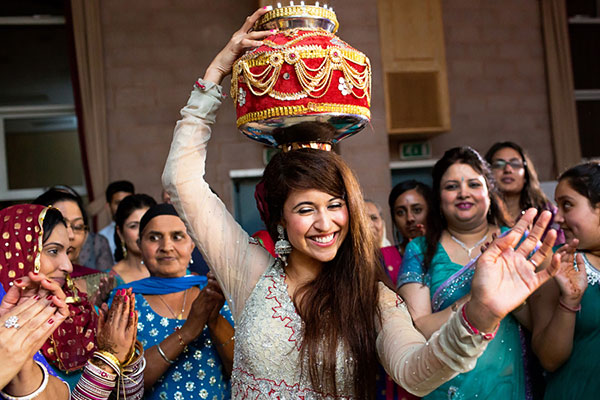 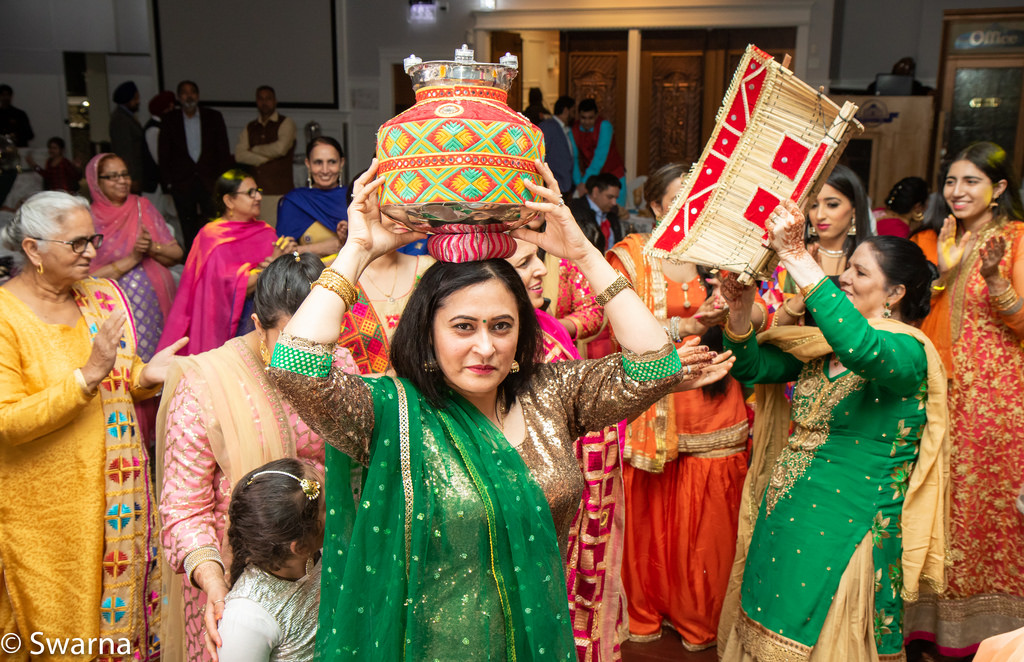 This Ceremony is immediately followed by haldi ceremony. Bhabhis of the groom and the bride respectively at their places, fetch water in a ghada (earthen pitcher) from the near by temple or gurudwara and the couple is to bathe with this holy water before their wedding.

The groom after being dressed up in his wedding outfit participate in a puja.   A pink colored Chunni and Sehra is blessed during this puja by the priest. Then, sister and brother-in-law of the groom ties Sehra on his head. The Bhabhi of the groom puts surma in his eyes in order to charge off all sort of evil presence and for a safe journey. He then climbs the Ghodi.

As the groom and his attendants departed for the venue, the bride is also getting ready. She put on her wedding outfit-lehenga choli(Bridal Outfits) and all the jewelry (Bridal Outfits). The professional make-up artist gives her a proper Bridal look.

As soon as the groom arrives at the wedding venue along with his motorcrade, they are welcomed by the Bride’s family members at the entrance.  A warm welcome is done; both the families embrace each other. The relatives of both families hug each other. This ceremony is called Agwaani.

There Is latest Trend to welcome with brooches. These brooches can be attached on the clothes of each other thus giving a title of Team Ladkewale and Team Betiwale

After the warm welcome, the groom enters the wedding hall and he is led to the stage. The bride walks in at the sacred muhurat. The couple then swaps the garlands.

This ceremony is full of fun and entertainment as there is a competition on both sides to uplift their corresponding high so that the second party can’t reach them.

After the Jaimala ceremony, the Kanyadaan ceremony happens. Kanyadaan means “giving       away the daughter”. The word Kanyadaan is made up of two words- Kanya means Daughter and Daan means Donation. This ceremony is very heart touching. The Father of the Bride puts her right hand on groom’s right hand, through the vedic mantras the bride’s father requests the groom to acknowledge his daughter as his spouse. He also requests the groom to take good care of his daughter. He tells the groom that she has been brought up with so much love & care and the bride’s father informs the groom that he expects the groom to give her equal care & love and respect. He also gives advice to his daughter to love and take care of her husband and his family. 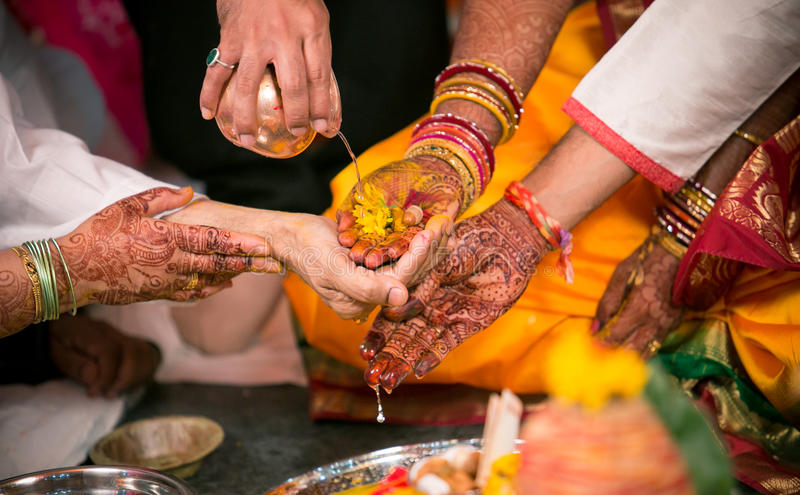 After Lajahom ceremony, Vedic wedding ceremonies are marked as completed. After Lajahom Ceremony, Sindoor daan ceremony is performed. The groom, by parting bride’s hair fills sindoor. This indicates the end of the wedding ceremony and the beginning of a new life of the Bride and the groom as a couple.

This exactly is not a strict and must follow ceremony. It is usually followed in most of the North Indian weddings.

Before stepping down for phere in the mandap, the groom has to take off his footwear or shoes. At that time, the sisters of the bride take away the shoes and hide them. On the completion of the wedding, the groom finds his shoes are lost. What happens next is very funny and entertaining. The sisters of the bride negotiate with the groom, and demand money to discharge his shoes. The groom has to fulfill their demands.

Immediate after this ceremony, lavish dinner is served to the guests. Punjabi food at a wedding is one of the things one should not miss. Multiple food cuisines are served, live counters and separate stalls are arranged to serve variety of tasty and lavish food.

On the subsequent day of the marriage, the bride had to bid bye to her immediate family and friends. It’s a very emotional moment for all. The very pleasant and cheerful moments turned in to  very emotional and sentimental moments in just few hours. The bride then throws handful of puffed rice over her shoulder’s in her backward direction. Through this ritual she says thanks to her family for taking care and loving her for so long. Then the brothers of the bride escort her to the decorated car. The return motorcade is known as Doli. Before the doli leaves, the groom’s mother reaches at their place to do the preparations to receive the newly-wed couple.

The first post-wedding ritual is Paani Bharna that is celebrated at the groom’s place.  The mother-in-law applies mustard oil on entrance door (both sides) and she stays there till the time the doli arrives. As soon as the Newlywed couple arrives, the groom’s mother does the aarti of the bride handing a pitcher of water. On completion of each circle, the mother makes an effort to drink the water for the pitcher but she is stopped every time by the bride. She allows her to drink water in the seventh count only. The bride then turns over an urn of rice with her feet.

In this Ceremony, She is greeted in the house and escorted to the Puja room in the house. The couple then seeks blessings and after that the bride sits with her uplifted veil. Family elders then bestow the bride with their blessings, gifts and jewelry.

The groom’s family throws a lavish party to honor the newlyweds. It is fun filled night with loads of music and dance. Guests are invited to attend the party.

The bride comes to her parent’s home along her husband for Pag Phera. They are welcomed with a grand lunch. The couple spends the night there and on next morning they return to groom’s place. This ceremony marks an end of the happening Punjabi wedding. 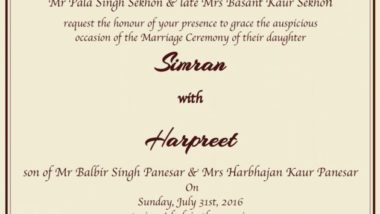 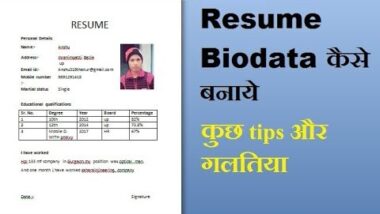